Search
You are here:

Rationale: The Pearl Project was designed with the belief that students learn best by doing. The course was designed to introduce students to the most rigorous information gathering challenges that working journalists face and to help them develop the skills, strategies and methods to collect, collate and analyze information for multimedia publication and broadcast.

With the model of the Innocence Project, headquartered at the School of Law at Yeshiva University to investigate alleged wrongful convictions, the Pearl Project was designed to be a collaborative investigative reporting team project conducted in journalism courses. And in the spirit of the Arizona Project, an investigative reporting project by journalists into the 1976 murder of Arizona Republic reporter Don Bolles, the Pearl Project centered on investigating the death of a journalist in the line of duty and completing that journalist’s work, or investigating the circumstances around a journalist in peril and completing that journalist’s work.

With more than 300 journalists killed worldwide over the past five years, investigating their deaths and continuing their work has become a critical component in protecting the enterprise of journalism in the 21st century, and there are no purer hearts than students to do noble work. The first Pearl Project investigated the kidnapping and murder of Wall Street Journal reporter Daniel Pearl, who was kidnapped and murdered in Karachi, Pakistan, in 2002. The project gave students a tangible link to journalists who are dedicated to the craft and gave students a real-world appreciation for the challenges facing journalists in the modern day.

As professors of the Pearl Project, we identified the focus of our investigation in the semester before the start of the course. We registered the class with a course description detailing the subject of the investigation, and we invited students to submit 500-word essays to explain why they want to be in the course. This is critical in identifying writing and critical thinking skills in students, as well as recognizing students who will take initiative, show personal commitment and be positive team players.

The first day, we introduced the reporting assignment and gave students a chronology of facts. We attempted to instill in the students a sense of the noble history of investigative reporting that they are inheriting. We discussed the assignment as a newsroom, and the class defined the reporting beats that it deemed most relevant to completing the project. Since the investigation typically involved crime or suspected crime that has received media coverage and gone through some process in the judicial system with possible political overtones, beats included: the journalist (through at least their work and correspondences), the journalist’s family, friends and colleagues, law enforcement, attorneys, media and politics.

We gave the students reading assignments related to the investigation, including books, articles and radio and TV interview transcripts. The students were assigned the task of writing 500-word essays on the beats on which they would like to work, the reporting strategy they would take and possible human sources they would interview.

Research: Students immediately looked for open source information, such as media articles, related to their beat, using Lexis-Nexis and other online database searches.

Gumshoe reporting: Students identified human sources with first-hand information. Early in the course, we conducted interviews in the classroom together so students could practice gathering information from sources using deft interviewing skills. We encouraged students to meet sources face-to-face, whenever possible, to solicit better interviews.

Outcomes: Students created a multimedia package with the following elements: a written narrative for publication in a professional media outlet; a multimedia production with a slideshow, audio and video; a digital archive with original documents scanned into it, much like done by SmokingGun.com; and a publicly available edited version of the Pearlpedia to share how the Pearl Project was organized from teaching and journalistic points of view. In completing the Pearl Project, students received a deep reward beyond the byline: a sense of accomplishment in protecting the franchise of investigative reporting. 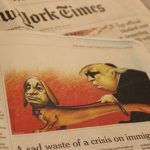