Search
You are here:

A multi-disciplinary team at the Pearl Project will:

The Pearl Project will investigate the rise of a new brand of anti-Semitism that targets Jews and their supporters with character assassinations, smear campaigns and hate. The investigation will identify the propaganda network that promotes the new anti-Semitism, its funding sources, it tactics, its propaganda campaigns and the psychological dynamics that it exploits. The project will examine how this new manifestation of anti-Semitism exploits our natural inclination towards empathy by framing the merchants of anti-semitic tropes as victims, in an attempt to shame and silence their critics and rally support for themselves.

Daniel Pearl was kidnapped and murdered in 2002 by militants in Pakistan who used Pearl’s identity as a Jew and his family history in Israel to demonize him. Among Pearl’s last words were “I am a Jew. My mother is a Jew. My father is a Jew.” The propaganda video, documenting Pearl’s murder, included images of Palestinians to attack the state of Israel. The propaganda video included Pearl saying that his great-grandfather had a street named for him in the Israeli city of Bnai Brak. And then Pearl’s murderers assassinated him.

The murder was so shocking and disturbing, it engendered no collective opposition to Jews or Israelis among mainstream swaths of the global public. Instead, the video earned the murderers a reputation as cold-blooded killers who won few sympathies.

It was very ineffective in appealing to the general public.

With the failure  of this old brand of hate, anti-Semitism and anti-Israel sentiment, the old hate has gone underground,  become camouflaged, often using “intersectional” politics as a cover and becoming even more dangerous.

We will conduct first-hand interviews, establish the identities of anti-Semitic propagandists, file FOIA requests  to have documents released by the FBI, State Department, Justice Department and Defense Department, on issues of foreign funding and foreign relations, and investigate scientific research to establish the psychological dynamics of why the new anti-Semitism works.

The lessons from this case come at a critical time. The murder of Pearl was an iconic moment for contemporary Jewish history and identity. It harkened back to the targeted murder of millions of Jews during the Holocaust and carried a tragic resonance because of Pearl’s close family association to the state of Israel.

With a new form of anti-Semitism emerging, hidden in shared values like free speech and human rights, Jews find themselves at a disadvantage in defending themselves. The new form of anti-Semitism may be shielded in intersectional politics, where Jews are defined as near the top of the oppression hierarchy, even while they are the number one recipient of religious hate crimes. This has the effect of accusing Jews of “punching down” when they mount a strong defense against the use of anti-Semitic tropes.

In addition, the new form of anti-Semitism may be hidden in historically anti-Semitic tropes that substitutes “Jew” for “Zionist.” Israel has become the “Jew” of countries, and, while any country’s policies are open to debate and criticism,  when Israel is demonized, it’s existence uniquely de-legitimized, and is subjected to double-standards, the discourse has crossed the red lines into the new anti-Semitism. And, with new red lines in the debate, many defenders of Jewish people and the state of Israel find themselves in the crosshairs. They include Muslim reformers.

Understanding the hate that was a part of Pearl’s murder and the new strain of hate  is of wider importance. The murder represented a turning point in the experience of modern day Jews. Now, Jews have increasingly found themselves targeted for violence. Since Pearl’s murder, we have seen a record number of anti-Semitic attacks and hate in post-9/11 society.

While the first Pearl Project identified the killers of Pearl, it didn’t anticipate the new incarnation of the hate that killed Pearl. We are attempting to honor the sacrifice of Pearl’s life in the pursuit of humanity with a simple, but ambitious hope: understanding the hate that motivated Pearl’s murder and mitigating it, while training a new generation of journalists, political psychologists, historians and researchers.

While a handful of researchers, journalists, scholars, and advocates have begun to make some headway in mapping out the field of players, institutions, infrastructures, and mechanisms behind the highly masked anti-Semitism movement, we still know very little about the way in which the movement operates and how its work is planned, funded, implemented, and coordinated.

Outreach to Subject Experts: The Pearl Project’s first step will be to interview and engage journalists, researchers, academics, and leaders who are researching and writing on anti-Semitism, and to develop a roster of knowledgeable and credible experts to whom journalists and policymakers can turn for information.

The Pearl Project will research and track the activities of the most prominent drivers of the new anti-Semitism. The Pearl Project will examine the role played by media professionals, prominent politicians, pundits, and donors in spreading these new iterations of  anti-Semitism. This research will form the basis of a Pearl Project audit of anti-Semitic activities that will inform a strategy convening researchers and advocates, including representatives of Jewish organizations and the global community. Participants will be asked to formulate strategies for educating the public about these new mutations  so that they can combat anti-Semitism. The convening is planned for the first quarter of 2020.

The Pearl Project’s research and communications professionals, bloggers, and reporters will aim to drive and define the debate over anti-Semitism on a rapid response basis through research, reporting, and targeted press outreach. Pearl Project staff will travel to anti-Semitic conferences, events, and meetings, where speakers often use anti-Semitic tropes, and track and report on instances where individuals engage in local controversies, using anti-Semitism. Staff will also research and monitor the leaders who promulgate these tropes and the media outlets that promote them, debunk their anti-Semitic attacks, write timely exposes and provide a fresh and continual stream of sharp analysis and news, and disseminate its exposes through blogs and other media outlets.

Building upon the audit, strategy convening, and research described above, the Pearl Project will release a comprehensive report on anti-Semitism and its connections to organizations, including those that focus on national security and foreign policy issues. The report will explore not only well-known leaders but groups operating under the radar that feed mainstream public with anti-Semitic argumentation. The report will also explore grassroots and state-level networks and their ties to prominent groups that have organized local anti-Semitic campaigns. In addition, the report will keep an eye on the emerging dynamics of anti-Semitic bigotry in connection with the 2020 presidential election cycle.

This research will be conducted under the direction of the Pearl Project’s  co-directors staff and will utilize several consultants with expertise in anti-Semitism, rhetoric, communications, propaganda, psychology and foreign policy. The project will also utilize researchers with expertise in analyzing the finances of nonprofits and think tanks. The Pearl Project will develop a timely and strategic launch of the report that will use social media outlets and online marketing teams, as well as outreach to the U.S. Congress, the White House, the media, civil rights groups, civil liberties and human rights advocates, national security groups, faith communities, and global groups, among others. 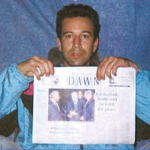